Reduced fuel consumption and lower rolling resistance are the hallmarks of the new Continental VancoEco tyre for light commercial vehicles. Specially developed for vans such as the Mercedes Viano, Vito and Sprinter, Ford Transit and Volkswagen T5, Continental’s VancoEco boasts up to 30% less rolling resistance and a calculated four percent saving in fuel and emissions, than standard versions. At the same time engineers have managed to cut the braking distances on both wet and dry road surfaces making the tyre more car-like in its performance.

The great savings potential has been made possible by two design measures that together help reduce rolling resistance considerably. VancoEco features a new silica tread compound optimised for low rolling resistance. In addition, the tread design has been changed so that deformation, which all tyres are subjected to when the tread elements make contact with the road surface, is reduced considerably. The two measures combined with a shallow tyre contour allow up to 30 percent less rolling resistance equates to a four per cent reduction in fuel consumption.
With VancoEco, Continental’s engineers have managed to achieve low rolling resistance without compromising on the inherent safety features present in all its tyres. In addition to helping lower fuel consumption the VancoEco tread pattern is designed in such a way that it forms small gripping edges during braking. This helps to reduce braking distances dramatically on wet road surfaces or when vans are fully loaded.
Tracey Hyem, Brand Manager Continental Tyres UK commented: "With the new Continental VancoEco we estimate that drivers can reduce their fuel consumption by around four percent with a regular, controlled driving style. In addition to this, the VancoEco range features a solid belt tread, which transfers steering commands precisely giving the driver total confidence in wet driving conditions or when the vehicle is fully loaded."
The VancoEco range is currently available in 15" and 16" rim sizes in sizes to fit the Mercedes Vito and Viano and the Ford Transit. Further sizes will follow in 16" and 17" in 2011 to fit the Mercedes Sprinter, Volkswagen T5 and Renault Master vans.

Rolling Resistance is the force acting opposite to that of the direction of travel when the tyre is rolling. In essence, it’s a measure of how much the tyre wants to stay still!

Grip in the wet is one of the most important safety characteristics of a tyre. Excellent grip in wet conditions results in shorter braking and fewer accidents.

Concerns about pollution, including noise pollution are increasing. The tyre industry is trying to combat this by giving consumers the ability to compare tyres by the amount of noise they create. 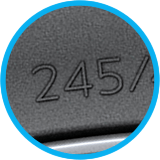 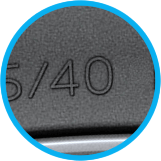 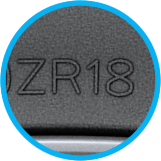 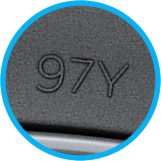 To give you the maximum choice of tyres for your vehicle our search results include tyres with your chosen speed rating or with a higher rating. Your speed rating indicates the maximum speed at which a tyre's performance is guaranteed for its load rating.

Your speed rating is indicated by a letter on your tyre from the following table:

Summer tyres are designed and engineered to work best during the warmer summer months. They are created with a specific tread pattern for optimal performance on both dry and wet roads when the air temperature is above 7°C.

All season tyres essentially combine elements of summer tyres and winter tyres to create a tyre that has benefits of both so that they can be used all-year round, giving drivers peace of mind whatever the weather throws at them.

Winter tyres are designed to excel in performance once the temperature drops below 7°C. The compound of the tyre typically features a higher concentration of natural rubber than other standard tyres, which stops the tyre from hardening in freezing conditions.

Run Flat tyres are designed specifically for the purpose of remaining functional, for a limited amount of time, with no air pressure in the tyre. What this means is that should you suffer a puncture whilst driving, the tyre will still be usable for around fifty miles.

Car tyres need to be able to withstand different-sized loads. This means there needs to be different types of tyres, as the tyres used for a large vehicle, an SUV or a fully loaded transporter have to take more weight than those of a normal car. XL tyres have been especially developed for use with heavy loads.

4x4 tyres are designed for larger SUV and utility vehicles and come in on-road, off-road styles and all terrain varieties.

These tyres are design specifically with vans in mind, catering for all van types including small delivery vans right through to larger panel vans.

Some tyres are tested and approved by vehicle manufacturers. These tyres have specific symbols on their sidewall to indicate the vehicle type they are approved for. If you find any of the following symbols on the sidewall of your existing tyres then you should replace them with tyres with the same symbol.